This section goes into greater detail on how to build and reuse the components of Hue.

Then start the dev server (which will auto reload):

If you are changing Javascript or CSS files, also start:

Then it is recommended to use MySQL or PostGres as the database.

Open the hue.ini file in a text editor. Directly below the [[database]] line, add the following options (and modify accordingly for your MySQL setup):

Adding ‘hue’ as a workspace, then:

First step is to configure pycharm to use the Hue virtual environment at ./build/env/env 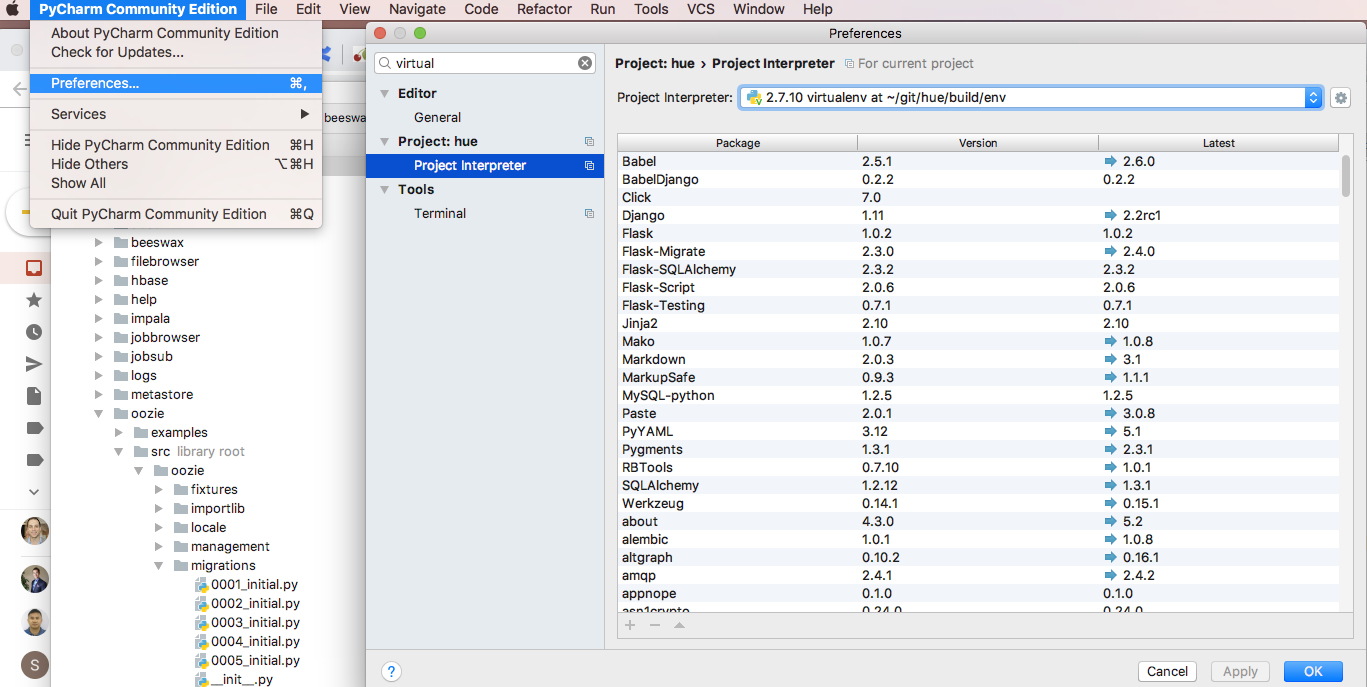 Second step is to configure the debug configuration

First step is to configure Eclipse to use the Hue virtual environment at ./build/env/env 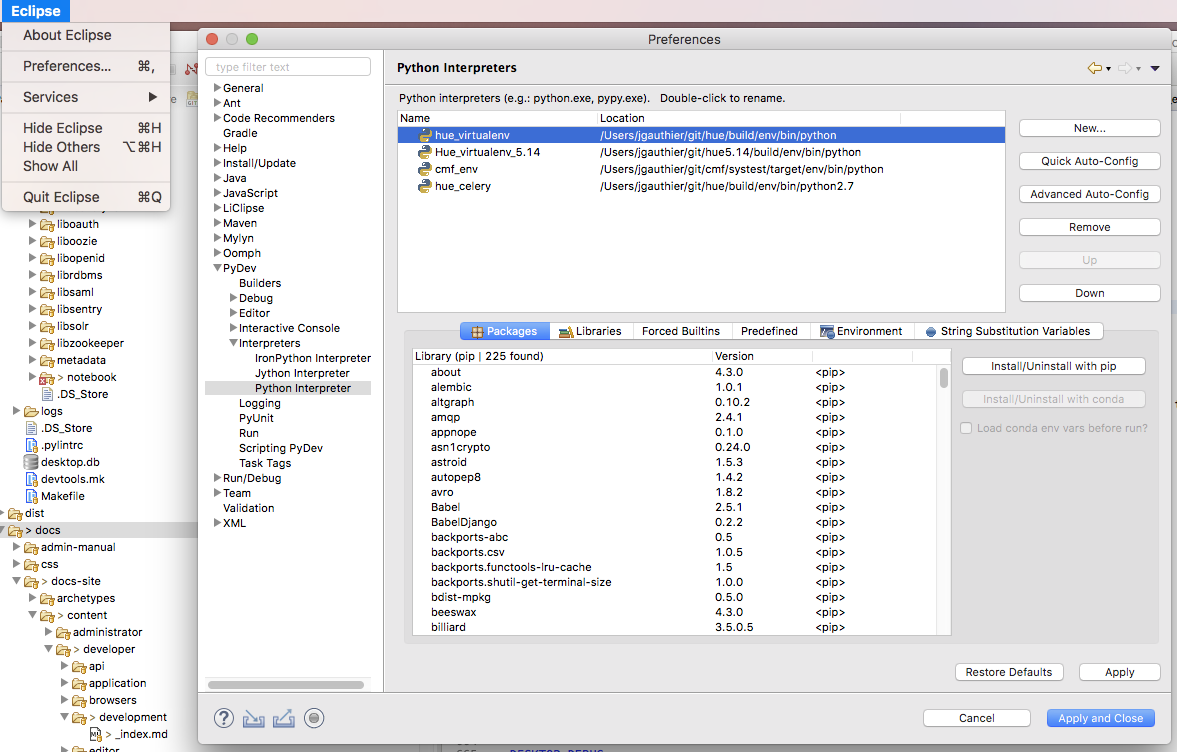 Second step is to configure the debug configuration 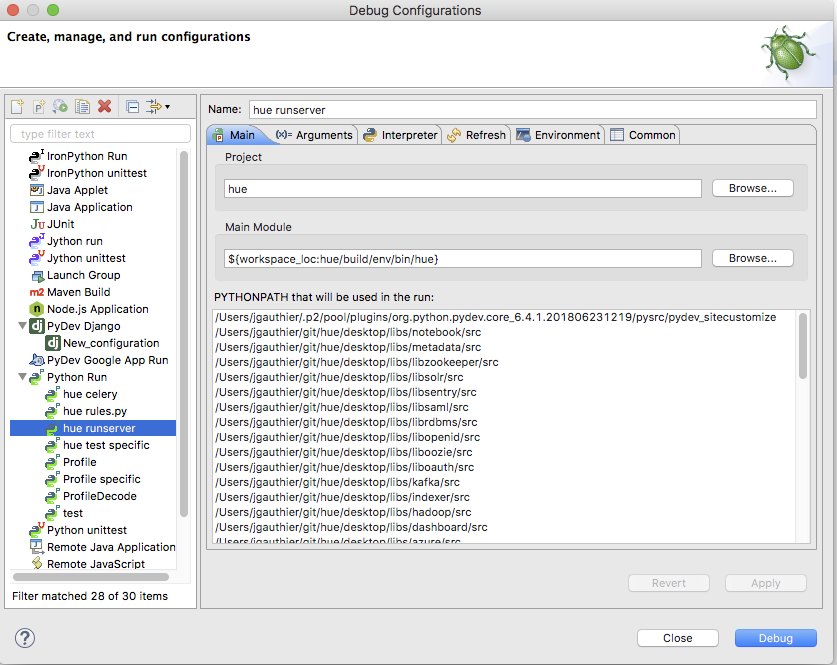 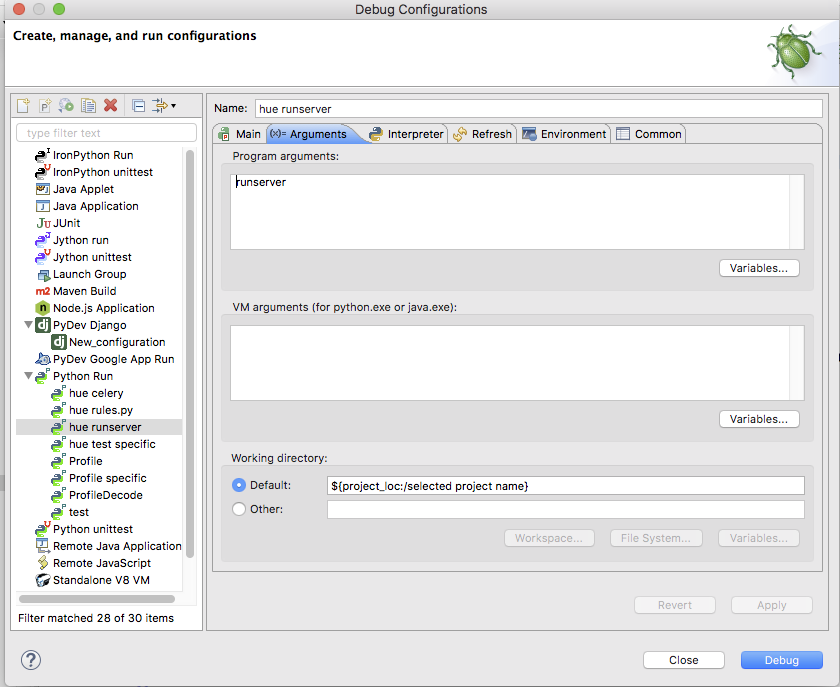 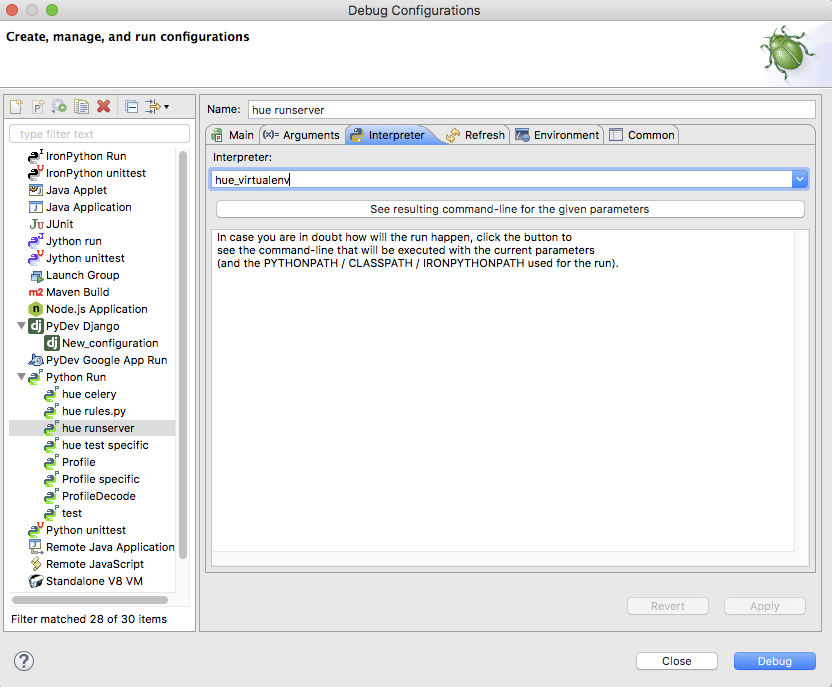 Hue, as a “container” web application, sits in between your Hadoop installation and the browser. It hosts all the Hue Apps, including the built-in ones, and ones that you may write yourself. 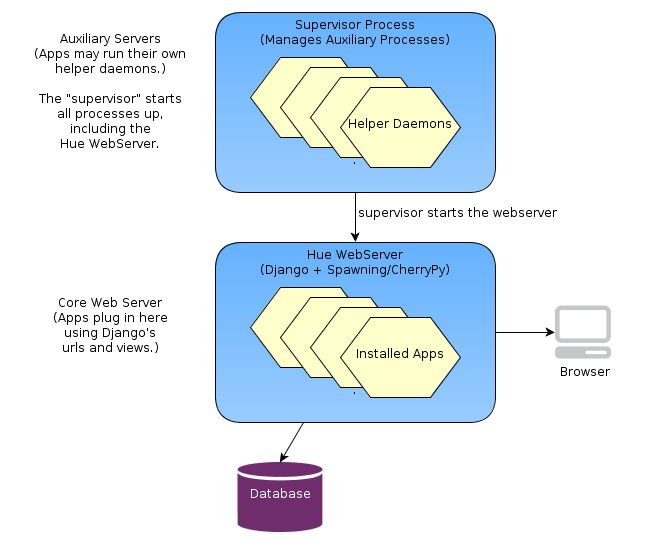 Hue is a web application built on the Django python web framework. Django, running on the WSGI container/web server (typically CherryPy), manages the url dispatch, executes application logic code, and puts together the views from their templates. Django uses a database (typically MySql or PostGres) to manage session data, and Hue applications can use it as well for their “models”. (For example, the saved Editor stores saved queries in the database.)

In addition to the web server, some Hue applications run daemon processes “on the side”. Some examples are the Celery Task Server, Celery Beat. 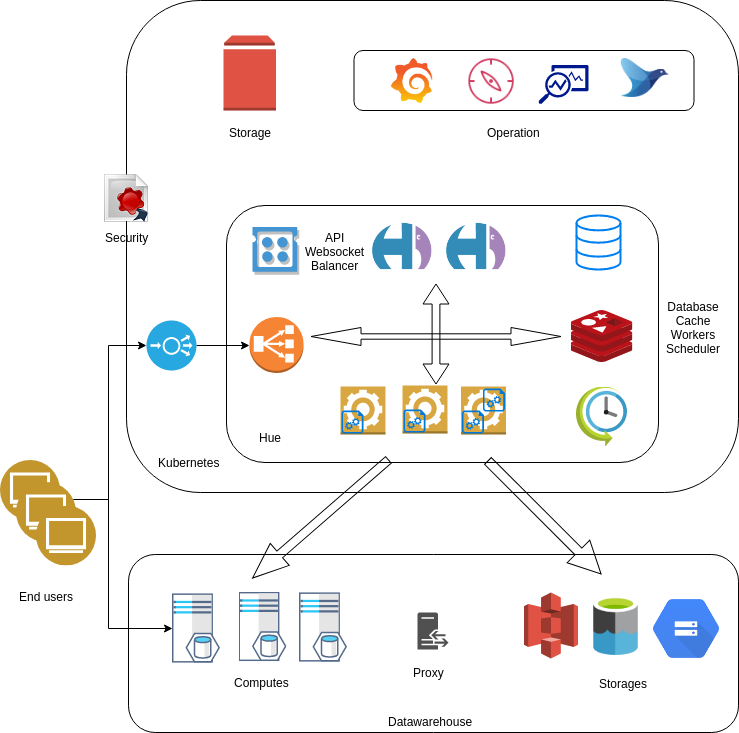 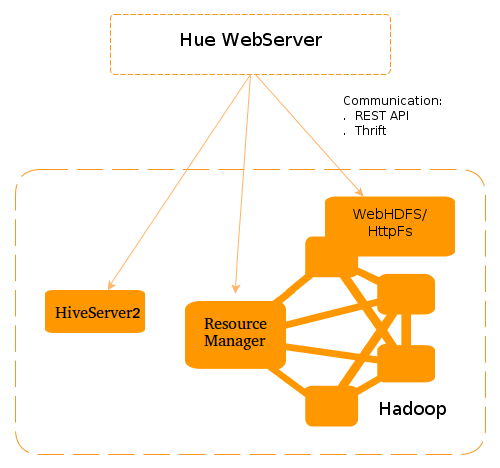 Hue provides some APIs for interacting with external services like Databases of File storages. These APIs work by making REST or Thrift calls. 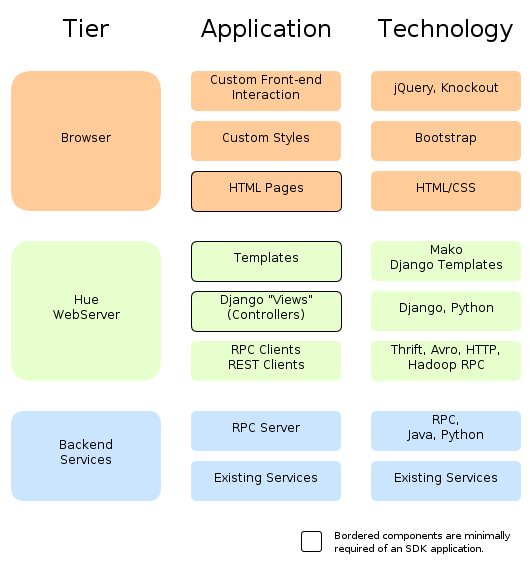 A Hue application may span three tiers: (1) the UI and user interaction in the client's browser, (2) the core application logic in the Hue web server, and (3) external services with which applications may interact.

The absolute minimum that you must implement (besides boilerplate), is a “Django view” function that processes the request and the associated template to render the response into HTML.

Many apps will evolve to have a bit of custom JavaScript and CSS styles. Apps that need to talk to an external service will pull in the code necessary to talk to that service.

The Hue “framework” is in desktop/core/ and contains the Web components. desktop/libs/ is the API for talking to various Hadoop services. The installable apps live in apps/. Please place third-party dependencies in the app's ext-py/ directory.

The typical directory structure for inside an application includes:

For the URLs within your application, you should make your own urls.py which will be automatically rooted at /yourappname/ in the global namespace. See apps/about/src/about/urls.py for an example.

Your application's conf.py is special. It provides access to the configuration file (and even default configurations not specified in the file). Using the above example, your conf.py should define the following:

A desktop.lib.conf.UnspecifiedConfigSection object for filesystems, such as:

An UnspecifiedConfigSection is useful when the children of the section are not known. When Hue loads your application's configuration, it binds all sub-sections. You can access the values by:

Application can automatically detect configuration problems and alert the admin. To take advantage of this feature, create a config_validator function in your conf.py:

Each app used to have its own model to store its data (e.g. a saving a SQL query, query history…). All the models have been unified into a single Document2 model in the desktop app:

The Document2 model provides automatically creation, sharing and saving. It persists the document data into a json field, which limits the need ot database migrations and simplifies the interaction with the frontend.

Document2 is based on Django Models are Django's Object-Relational Mapping framework.

Walk-through of a Django View 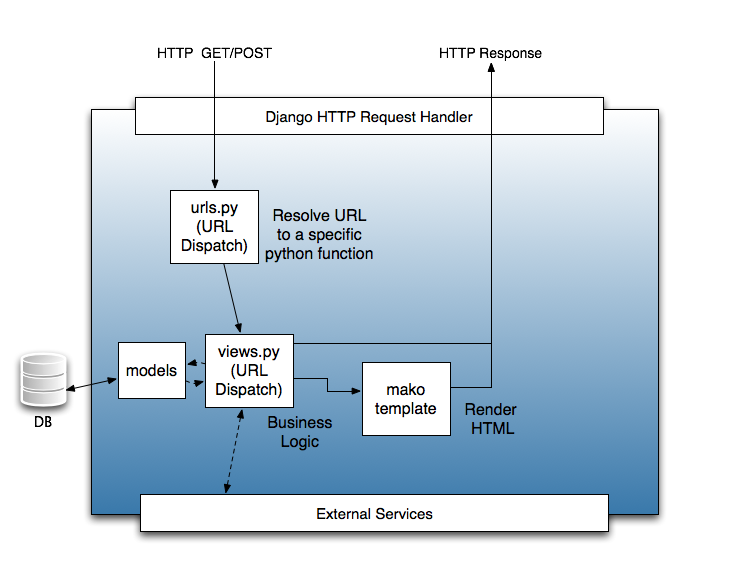 Django is an MVC framework, except that the controller is called a “view” and the “view” is called a “template”. For an application developer, the essential flow to understand is how the “urls.py” file provides a mapping between URLs (expressed as a regular expression, optionally with captured parameters) and view functions. These view functions typically use their arguments (for example, the captured parameters) and their request object (which has, for example, the POST and GET parameters) to prepare dynamic content to be rendered using a template.

In Hue, the typical pattern for rendering data through a template is:

The render() function chooses a template engine (either Django or Mako) based on the extension of the template file (".html” or “.mako”). Mako templates are more powerful, in that they allow you to run arbitrary code blocks quite easily, and are more strict (some would say finicky); Django templates are simpler, but are less expressive.

In addition to that, backends may support a manages_passwords_externally() method, returning True or False, to tell the user manager application whether or not changing passwords within Hue is possible.

Applications may define permission sets for different actions. Administrators can assign permissions to user groups in the UserAdmin application. To define custom permission sets, modify your app's settings.py to create a list of (identifier, description) tuples:

Then you can use this decorator on your view functions to enforce permission:

Right now, we check in the generated thrift code. To generate the code, you'll need the thrift binary version 0.9.0. Please download from http://thrift.apache.org/.

The modules using Thrift have some helper scripts like regenerate_thrift.sh for regenerating the code from the interfaces.

After upgrading the version of Hue, running these two commands will make sure the database has the correct tables and fields.

Developing applications for Hue requires a minimal amount of CSS (and potentially JavaScript) to use existing functionality.

In a nutshell, front-end development is using:

For changes to the files under src/desktop/js the following applies:

First make sure all third-party dependencies defined in package.json are installed into node_modules/

To generate the js bundles run:

During development the bundles can be autogenerated when it detects changes to the .js files, for this run:

Before sending a review with changes to the bundles run:

Hue uses Bootstrap version 2.0 CSS styles and layouts. They are highly reusable and flexible. Your app doesn't have to use these styles, but if you do, it'll save you some time and make your app look at home in Hue.

After changing the CSS in a .less file, rebuilding with:

Or run in watch mode that will generate the .css on any change to the .less files:

After less changes make sure linting is run with:

You should create an icon for your application that is a transparent png sized 24px by 24px. Your settings.py file should point to your icon via the ICON variable. The create_desktop_app command creates a default icon for you.

Hue ships with Twitter Bootstrap and Font Awesome 3 (http://fortawesome.github.io/Font-Awesome/) so you have plenty of scalable icons to choose from. You can style your elements to use them like this (in your mako template):

For better performances, Hue uses the Django staticfiles app. If in production mode, if you edit some static files, you would need to run this command or make apps. No actions are needed in development mode.

Open a pull request which will automaticlly trigger a CircleCi unit test run.

How to run just some parts of the tests, e.g.:

The test management command prepares the arguments (test app names) and passes them to nose (django_nose.nose_runner). Nose will then magically find all the tests to run.

Tests themselves should be named *_test.py. These will be found as long as they're in packages covered by django. You can use the unittest frameworks, or you can just name your method with the word “test” at a word boundary, and nose will find it. See apps/hello/src/hello/hello_test.py for an example.

To run all the tests (unit and integration), use:

To run only tests of a particular app, use:

To run a specific test, use:

To run a specific test in a class, use:

Start up pdb on test failures:

The tests are next to the file under test, the filename of the test has to end with .test.js.

Run all the tests once with:

Run tests from a specific file once:

To run the tests in watch mode:

While in watch mode Jest will detect changes to all files and re-run related tests. There are also options to target specific files or tests. Press ‘w’ in the console to see the options.

Note: on certain OS like Ubuntu, running the tests via a global jest seems to not hang your system

How to update snapshot tests:

An example of component test:

An example of a binding test:

CircleCi automatically run the unit tests (Python, Javascript, linting) on branch updates and pull requests. Branches containing ci-commit-master will try to be auto pushed to master if the run is green and the Github permissions match. This logic is described in the config.yml.

The runs happen in an image based on latest Hue's image.

Note: until the desktop/ext-py dependencies are moved to a requirement.txt, adding new Python modules will require adding them first to the Docker image by building a Hue branch which has them.

To not fail on integration tests, Hue would need to be configured to point to a live cluster, or you could install the mini cluster (only once) with:

Note: the integration tests are going to be ported to a more modern CI with dependencies provided by containers.

Those are tagged with integration either at the class or method level:

Historically, the same thing used to be done with the requires_hadoop tag:

Update the versions to the next release (current release +1):

How to count the number of commits since the last release:

And add them and the authors to the release notes:

Source of the release: https://github.com/cloudera/hue/archive/release-4.6.0.zip

Push to the CDN:

Other things to update:

Build it and push it to the docs host.

Try basic changes in Hue without compiling it locally:

Then edit the [[database]] section to specify a proper database, here MySql:

Then map the local Hue source code into the running container (so that local edits are seen in the running Hue):

Note: code updates won’t be seen after the Docker container runs. For this Hue would need to be started in dev server mode by replacing the line by

and recompiling the Docker image. It will then auto-restart on Python code changes. For JavaScript, those would need to be compiled.

Build it and see live changes:

Check for links not working (returning a 404) with muffet, a fast link checker crawler:

Then after booting the hugo documentation server, we point to its url. We also blacklist certain urls to avoid some noisy false positives:

After modifying files under tools/ace-editor run the following to build ace.js

The Hive documentation is generated directly from the Hive wiki by using an exported epub file.

The Impala documentation is generated from the ditamap files in the Impala GitHub repo.

How to update all the messages and compile them:

How to update and compile the messages of one app:

How to create a new locale for an app: